A History of Beef Jerky 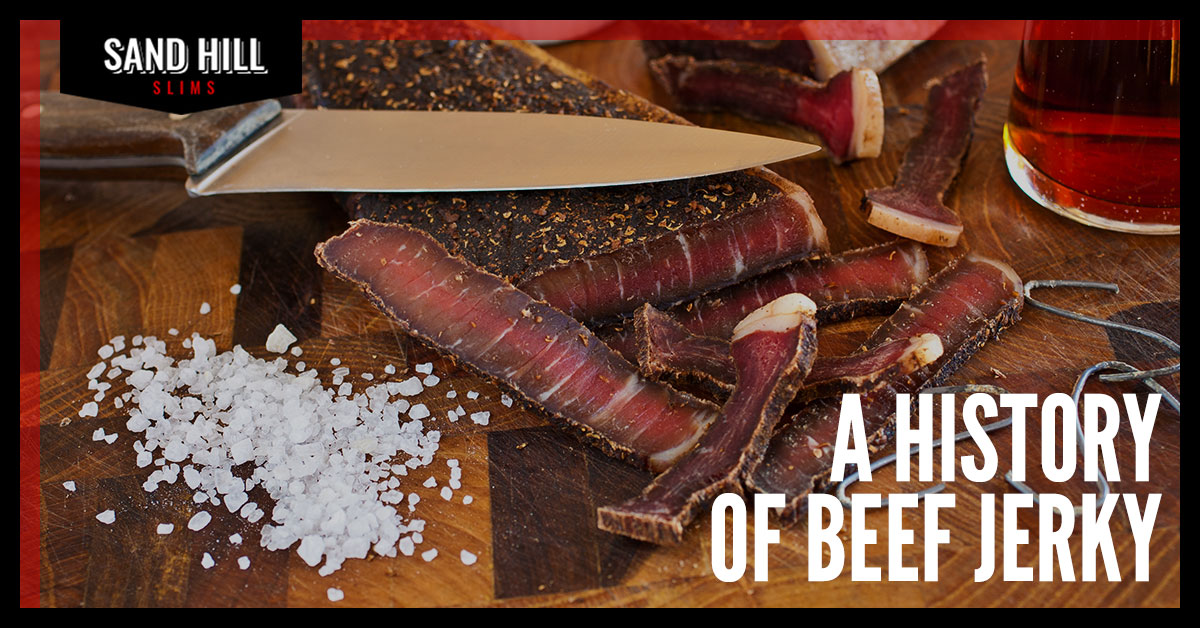 Hello fellow jerky enthusiasts! Welcome to the jerky emporium, where we'll jerk your chain like a bunch of jerky filled jerks. All kidding aside, we love beef jerky! If you love it as much as we do, check out our Sand Hill Slims, available for order online today. In the meantime, perhaps you will be interested in a little jerky history. No, we're not jerking your chain, there's a history of jerky:

Why and Where It Came From

Have you ever wondered how people survived before refrigeration, back when diarrhea was a fatal affliction? The answer is what eventually gave us the wonder of jerky, so give it its due respect; that would be preservation! Drying out/dehydrating fruits and meats is actually the oldest method of food preservation for homo sapiens. Spoiled meat was a death sentence in ancient times, and dried fruits and meats (and we'll say it, jerky) were their savior!

The earliest archeological records of preserved food come from Ancient Egypt, where pharaohs tombs have been excavated that were full of dried foods, some of it remarkably in tact for being thousands of years old. However, this was not necessarily the conventional jerky that we know of today.

Origin of the Word

The word "jerky" most likely comes from Native American roots. According to the Manataka Indian Council, the word is traced back to a word from the Quechua tribe (which existed within the Inca empire): "ch'arki". It means "to burn meat", and referred to the alpaca and llama meat that the Quechua used as food after de-boning, de-fatting, cutting into thin slices, pounding, and covering in salt. To keep it from going rotten, the ch'arki would then be baked in the sun or smoked over a fire.

Eventually, the Spanish Conquistadors adopted this practice, bastardizing the word "ch'arki" into "charqui". Due to this change, as well as the thick Spanish accent, the word "charqui" eventually evolved into the jerky we all know and love.

As we had mentioned before, the process of drying and dehydrating meats and fruits is what kept most people alive before refrigeration. With the new Native American methods of making jerky, people could pack more nutrients into longer lasting packages than ever before. The protein in meat is, of course, especially nutritious, and beef jerky gained popularity all across the American South and Midwest.

Of course, the group who popularized beef jerky over any other were the cowboys. Who doesn't conjure a picture of a cowboy riding into the sunset when you think of beef jerky? But they weren't the only ones responsible for its popularization. Eventually, access to more and more spices made jerky taste better, making it a pleasure on top of a necessity for many people. The military was also key in jerky's adoption after it was made a part of Reserve Rations during World War I.

Jerky in the Modern World

Beef jerky has not lost an ounce of momentum, still gaining popularity even today. And it is for the same reason, too; jerky is portable, nutrient packed, and filling. On top of that, advances in meat raising and understanding of how our bodies work is leading to safer, more nutritious meats. Here at Hague Angus Ranch, our Sand Hill Slims beef jerky is made with 100% grass fed, free range beef. It is a leap and bound healthier than your average jerky stick.

Want all of the beef jerky you can handle? Don't settle for some moderate, bland, unhealthy, ragamuffin jerky, go with the best: Sand Hill Slims! We take great care in the raising of our beef, and it shows in every delicious bite of our delectable beef jerky. Do you have any questions about our products, or how they will be delivered? If so, please do not hesitate to reach out to us by email. One of our friendly and knowledgeable representatives will be happy to provide any answers that you may need.