All You Need to Know About Beef 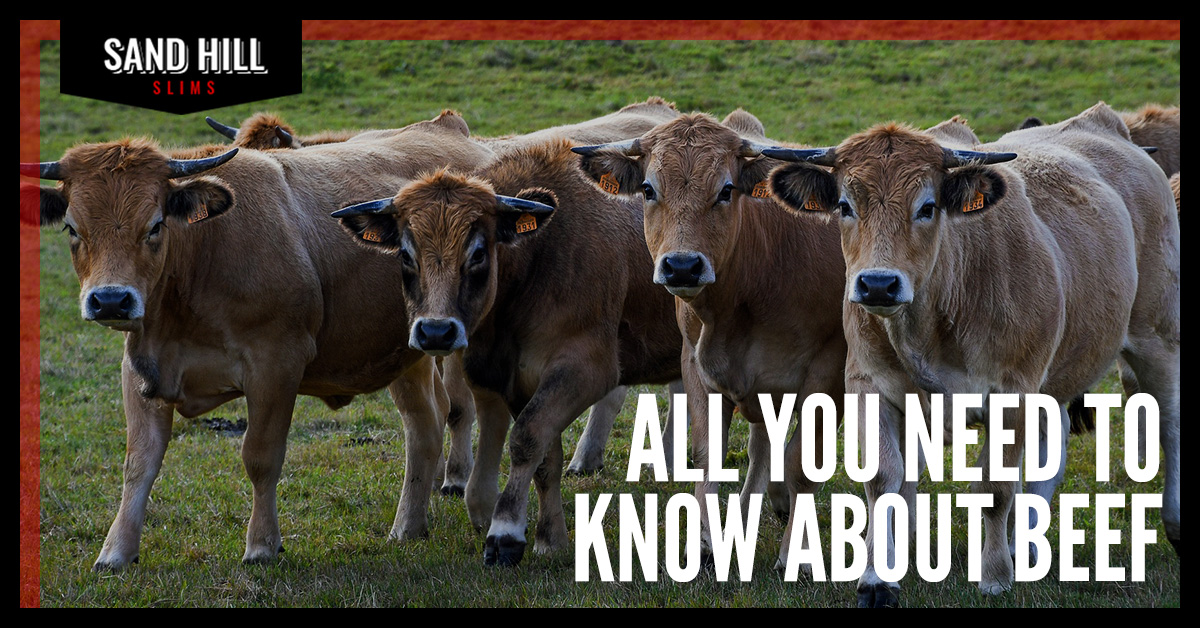 Here at Hague Angus Ranch, we raise beef for our delectable Sand Hill Slims: grass fed beef jerky sticks available online. Many people actually aren't that knowledgeable about beef, other than that they love it. Here, we want to go over some information about breeds, and why they are used for beef production.

There are over 250 breeds of cattle around the world, 60 of which can be found in the United States. However, only about 15 or so breeds are used for beef production. We go over the most prevalent ones here.

The Beefmaster breed was created in Texas around the 1930s. They are a cross between three other types of breeds, the Brahman, Hereford, and Shorthorn. They are used for their resistance to heat, insects, and droughts. They were made to live well in the harsh climates found in South Texas. Most commonly, they have a brown or brownish-red coloring.

The Angus breed was imported from Scotland in the year 1873. It is low maintenance that is easy to calve, and the breed has strong maternal instincts. This breed has a natural marbling, which makes for great texture and tasty beef. Black is the most prominent color in the breed, with red the next most prominent.

The Brahman was imported from India in the year 1854. It is most well known for the large hump that you can plainly see protruding from its shoulder. They also have a lot of loose skin, which actually helps them better thrive in hot weather. Their color varies from light to dark grey, and most Brahmans are a medium grey color.

The Brangus breed is a homegrown breed, developed in the United States in the year 1932.They perform well both in the pasture and in the feed lot, and have strong mothering instincts. They are used for beef production because of their high resistance to both heat and humidity. Their color scheme is a combination of red and black, and they have a sleek coat.

The Charolais was imported from France back in the year 1936. They have a range of good characteristics for beef breeding. They are extremely muscled and well built, with long bodies. They are famed for their ability to cross breed, are easy to calve, and produce lots of milk. They are almost wall white in color, and thus are easy to spot.

The Hereford was imported from England back in 1817. They are mostly known for two things: their grazing ability, and the ability of females to bear calves past 15 years of age. A Hereford cattle's appearance can be distinguished by their dark red coat with a light colored face, crest, underline, and dewlap.

Brought to the US from France in 1971, the Limousin, also known as the "Carcass Breed", has many traits that make it great for beef production. It has a high fertility rate, produces lots of milk, and is also easy to calve. Their coloring is generally a uniform golden-red or black.

The most notorious of beef breeds, the Texas Longhorn was brought to Mexico from Spain in 1493. It wouldn't be driven up to Texas until 1690. They are used because they eat a wider range of grass types and weeds than almost any other type of cattle, their beef is extremely lean, and they have natural immunities to many diseases and parasites. Their coloring is the most varied of any type of cattle, with no two having the same color pattern.

Hopefully you found this article informative. If you are looking for delectable grass fed Sand Hill Slim beef sticks, then check out our inventory, available for order online. For more information about our products, please do not hesitate to give us a call at your earliest convenience.