How Beef Jerky Is Made 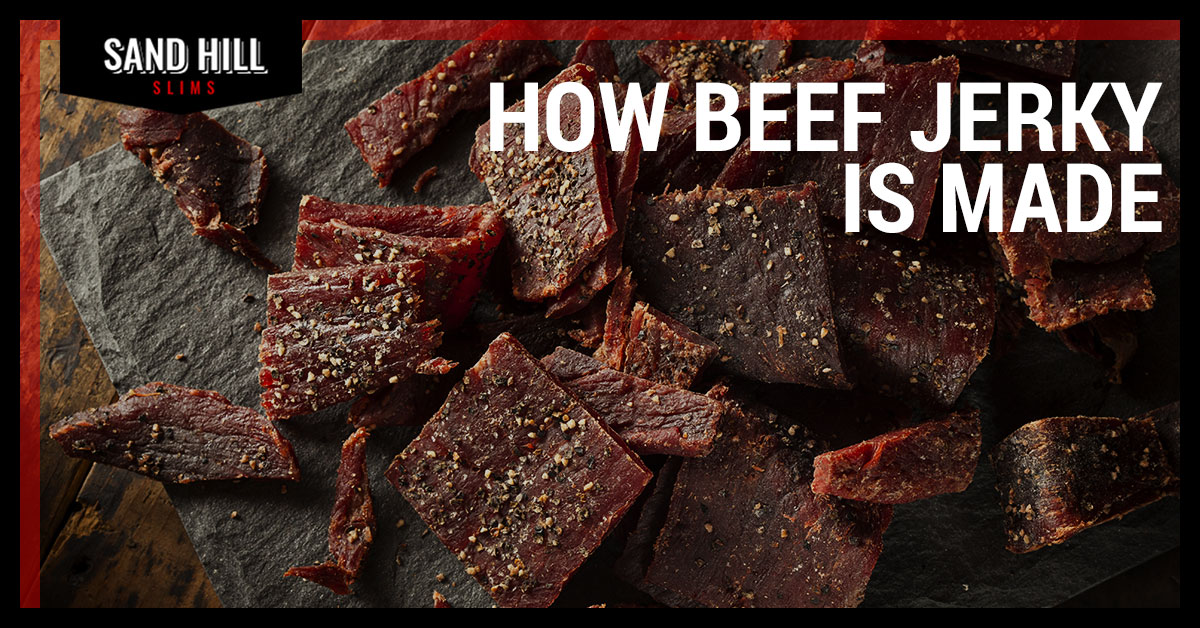 In case you hadn't noticed, we are big fans of jerky. While today it is pretty much just recognized as a great snack packed with protein for people on the go, it has actually played a role in the survival of our species for hundreds of years. How so, you ask?  By preserving nutritious food. Even today, the World Health Organization states that hunger is the biggest threat to the world's public health. This is especially troubling considering the world produces enough food to feed everyone, so it must have been really bad before recent agricultural advancements. So what is the deal? Well, one factor is how fast food perishes, especially meat, which is some of the most perishable food. Turning beef and other meats into jerky is a great way to significantly increase its shelf life. Here, we will go over why that is and how beef jerky is made.

Jerky is simply meat that has been cured using a salt solution, and then dried enough to lose at least 50 percent of its total moisture. Deer, buffalo, and elk are commonly used to create jerky, although beef is probably the most common. It is believed that jerky originated somewhere in South America in the 1800s, perhaps the Quechua tribe (descendants of the Inca Empire) who created meat comparable to beef jerky called ch'arki or charqui. Generally a rough brown texture, jerky is both much tougher than unprocessed meat as well as much more flavorful (even without the extra spices). Quechua ch'arki played a major role in their survival, allowing them to both eat when meat was plenty, as well as have a stock to pull from whenever it was scarce. They created their jerky analogue using a smoke drying process. On top of the perishable aspect, jerky is more nutritious, has less calories and cholesterol, and gives more energy than processed meat, although it does have a much lower yield, as it takes about five pounds of meat to make one pound of jerky.

Eventually, when the Spanish conquered the land, they assimilated the jerky making process into their culture and shared it with the rest of the world. This was at a time when the world population was beginning to increase, and this new method of preserving meat may well have played an important part (along with many other agricultural and technical advancements). Eventually, it would become the staple of both cowboys and pioneers that we all recognize it for today. The type of jerky made at this time would be comparable to what we eat now, which is both flavored and cured before the drying process begins.

How It Is Made

There are tons of ways to make jerky (don't ask, we'll never share our secret recipe!), but the general process is usually the same. We have broken it up here into three parts: preparation, curing, and processing.

To prepare jerky, it needs to be in the form of either whole muscle or ground beef. That means absolutely no bones, connective tissue, or fat left over.

For defatting, there are generally three methods: a large centrifuge, filtering, or pressing.

While the above might have cut it pre-FDA, nowadays there are other processes meat must go through when being manufactured into jerky that remove unwanted foreign material. For instance, it will be put on a conveyor belt for inspection, may be put on a metal screen and shaken,  may use water separation, or may remove metals via magnet.

As the meat is processed, usually the curing agent will be prepared. This is often done in a big tank that uses mixing blades to mix water, salt, seasonings, and other materials. Afterwards it will be heated until the curing solution is ready for use.

The meat can be processed and cured at this point, which generally happens one of two ways.

After the meat is cut it will be shaped into blocks and (re)frozen to temperatures between 18 and 28 degrees Fahrenheit. Then, it gets cut into thin strips along its meat fibers. Finally, the meat strips will be placed on wire mesh holders and placed in drying ovens. This process can take up to 12 or so hours, a long wait for sure, but the end result -- beef jerky -- is well worth it!

We hope you enjoyed this (not so) quick overview of how beef jerky is made. We welcome new jerky making aficionados into the fold, but if you want the tried and true taste of professional jerky, try a bite of our Sand Hill Slims! They are available for order online, and shipped right to your door. Feel free to reach out to us for questions regarding the product or delivery.