How Meat May Have Made Us Smarter 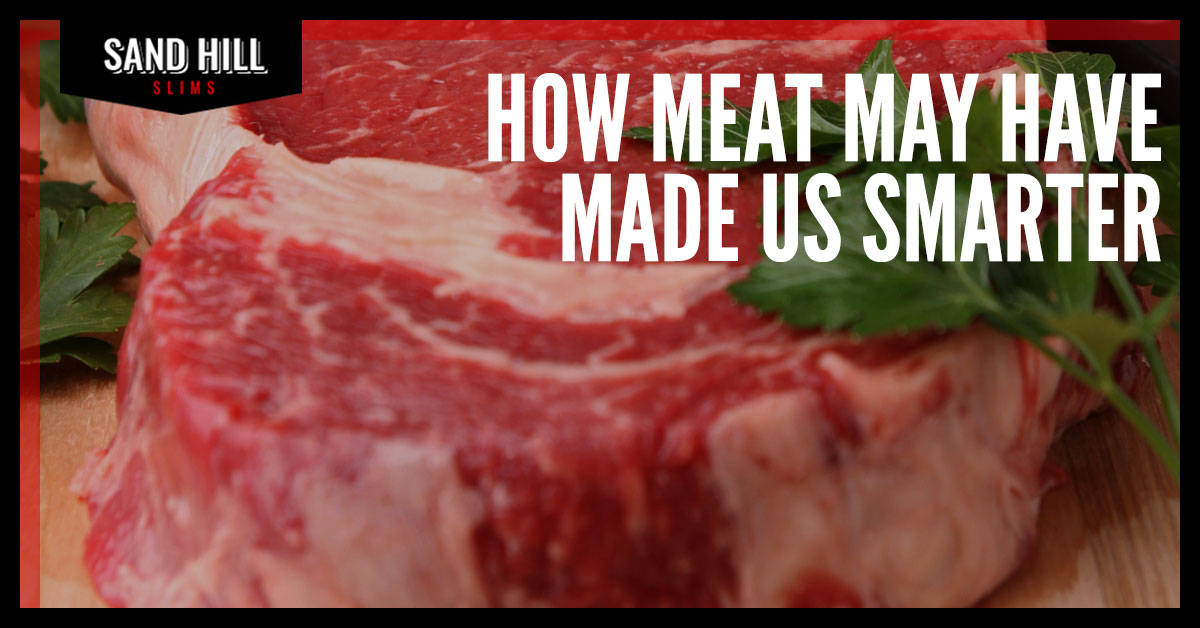 Vegans, they are obviously not us. We’re meat people. That's why we sell delicious, grass fed beef jerky sticks online.And deep down, we think everyone owes a great thanks to meat, even if they don’t know it. Don’t believe us? Let us throw some sciencin’ at you. According to this article published on livescience.com by Christopher Wanjek, meat played a huge roll in the evolution of our brain, otherwise known as the reason humans are numero uno.

Cutting to the heart (or shank) of the matter

Okay, so how can this be the case when there are so many just-as-smart-but-in-no-way-smarter vegans and vegetarians alive today? There's a simple answer for that: agriculture. Only in the past ten or so thousand years (arguably much less time ago, depending on the population you're feeding) did agriculture allow the kind of mass production of vegetables and fruits that would allow human populations to survive. Ten thousand years may seem like a lot, but it is a drop in the bucket in the history of homo sapiens (US!), which spans anywhere from 100,000 to 200,000 years.

So that explains that, but what evidence is there that eating meat made us smarter? For that, you need a little context. Human beings require about 20 percent of their entire body's energy at rest just for their brain. For a little perspective, primates (our closest cousins that also rank high on the intelligence scale in general) only use about half of that much energy on their brain function.

By most scientific accounts, it would have been impossible to forage for enough vegetation for early homo sapiens to consume enough energy to keep their brains working and improving the way they did. The reason animals like cows can survive on vegetation is because of their excessively large stomachs, which are essentially energy hogs. According to Leslie Aiello, who is an anthropologist in New York City, "You can't have a large brain and big guts at the same time." "There's only room enough for one of us in this body!", an anthropomorphic stomach and brain might say to each other. Are those crickets?

Anyways, some time about 2.3 million years ago, our ancestors began eating meat. We know this because it is around this time that cut marks started appearing on animal bones found at archaeological sites. Not bite marks, mind you, but cut marks that could have only been made by a man(cestor).

But that's not the only clue we have, there's another grosser, more sinister clue: tapeworms! According to the same Leslie Aiello, "The closest relative of human tapeworms are tapeworms that affect African hyenas and wild dogs." Apparently that could have only happened if at some point in our evolutionary history we had shared saliva with these animals, which would make sense if we ended up scavenging the same animal carcass.

Eventually, as meat entered our diet, our stomachs begin to shrink (who wants to carry around a huge vegetable processor all the time, anyways?). With the loss of much of this energy burning hog, we had plenty more energy to spend in more important places, like football (just kidding, our brains!).

The other half of the story

So now we know that meat played a huge part in our brain's development, but that is only half the story. Actually, consuming raw meat on top of vegetables STILL does not give us enough energy for our gigantic super smart brains. That is because our bodies have serious trouble processing raw meat, and aren't able to get enough nutrients from it. Luckily, our ancestors solved this problem in two ways.

First, they likely began to physically pound their food (like a nice cut of steak). If they had done this, it would have made the meat much easier to digest, giving them more nutrition from the same portion. But that still probably wouldn't have been enough for our, we can't say this enough, huge brains.

For that, we needed to cook our meat. Cooking meat breaks up protein chains, doing part of your stomach enzymes job for them. Additionally, muscle, the nutritious part of a kill, is wrapped in hard to digest collagen, which is melted to jelly when the muscle is cooked.

Hopefully you found this story interesting! If you're looking for some brain food after all this reading, check out our delicious grass fed beef jerky Sand Hill Slims, available for order online today. Feel free to give us a call if you have any questions about our product or delivery.