Unusual Meats Eaten Around The World 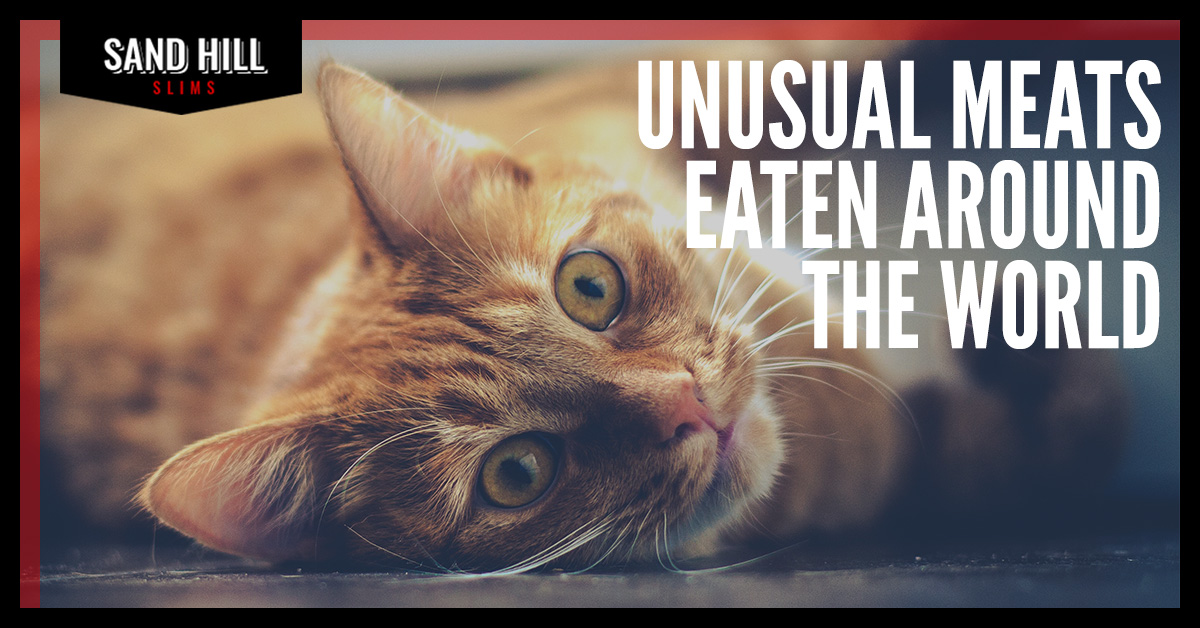 I don't think we even need to say what the best meat in the world (*AHEM BEEF!*) is, this is America. Instead, we will just point you to our delicious beef jerky sticks, available for order online right now. However, a lot of people in the world do like some freaky (to us, obviously) kinds of meat. To make you appreciate the meat you know, rather than the meat you don't, here is a list of some unusual meats eaten around the world.

Who doesn't love a good piece of chicken? Dark meat over here please! Drumstick, thigh, feet. Yup, we may not make use of our feathered friends' feet here, but in South America, East Asia, and South Africa, they are a delectable treat for any time of day. It's also a great way to punish chickens who don't take off their shoes at the door.

We don't want to typecast anyone, but there may be a few foods on this list exclusive mostly to Japan. Tuna eyeballs are one of these foods, and have a pretty long line of foodie admirers in the country. We are guessing the delicacy hasn't gained much traction worldwide though, just guessing...

Have you ever been eating a cracker and thought, "you know what this needs? The many legged husk of a soulless, stabby, butt spear with wings." Well, you can have just that when you take a trip to Japan and try out a wasp cracker. Pair it with a delicious cheese or your crippling childhood fears, it's up to you!

Well, at least they don't have swords on their butts. But spiders aren't really known for being appetizing. That doesn't stop people in Cambodia for eating them, though. We guess it is true; everything tastes better fried.

Finally, we're away from the creepy, crawly dishes, and to the solely creepy dishes. Silk worms have nothing to crawl with, so there won't be any errant legs getting stuck in your teeth. We're not sure if that will help with the taste, which Koreans tell us is similar to wood. Yum?

Okay, finally, a mammal. Now we are getting to some ACTUAL meat. We just wish it wasn't so darn cute. In Australia, far from a novelty, kangaroos are actually vastly overpopulated and have become pests in many areas.

Countries like Asia, Australia, and Africa have a high population of either crocodile or their alligator cousins. In these countries, crocodile has become a very highly valued meat. Said to taste somewhere between crab and chicken, these animals are no longer just ending up on the souls of your feet.

What better way to avenge Great Grand Pappy than to eat the snake that killed him? We don't envy the people that have to catch them, but fried rattlesnake has been a common dish in some places in the South for a long time. We can't say we wouldn't try it.

We know, we know, you can't eat man's other best friend. Not in some South American cultures, where this common pet is part of their normal diet. There, they are considered to be like rabbit, and eaten whole or cooked into casseroles. It doesn't seem like there's a lot of meat to be had, but if they enjoy it, to each their own.

Not even the sea is safe! We know starfish as the beautiful, star shaped sea creatures (and Patrick), that dry up in the sun. However, in China, they are a common delicacy, said to have a delicious meat on the inside.

Gah! No! Let's go back to spiders! Okay, believe it or not, in some parts of China, scorpion is a common delicacy. It is usually deep fried or skewered. We are not sure how they handle the poison in them; maybe it is the sweet release for once you've realized what horror you've ingested.

Another Australian delicacy, opossums are even more common there than they are in parts of America. It's not the cutest of animals, but we wouldn't hold that against the meat (Chickens aren't heartthrobs, either). If you've ever been there, who knows, maybe you tried it and didn't even know!

We are back to Japan (and some other Asian countries), where cat is on the menu! Do you think Grandma is aware of how delicious fluffy would taste seasoned, battered, and grilled? Probably not, these countries have a very different view of cats than we do here.

Hopefully these entries proved interesting, if not appetizing. We'll stick with our cows, chickens (the normal parts), and turkeys here, thank you. If you are looking for a delicious meat snack, look no further than our Sand Hill Slims. This beef jerky will blow your taste buds away. It is available for order online today, so grab it while you can! Please feel free to give us a call if you have any questions about our products or delivery. We'll be happy to provide you with any answers you may need.